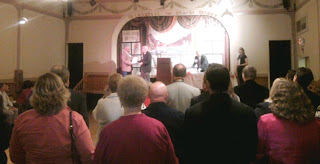 On stage accepting the award 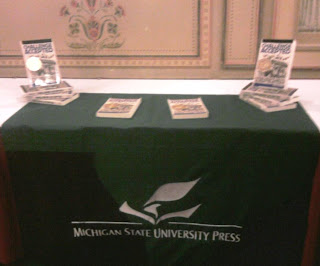 MSU-Press display with Challenge Accepted at the Conference 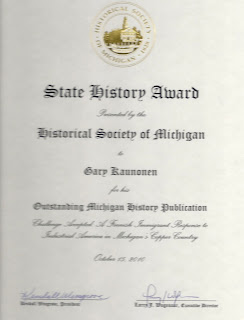 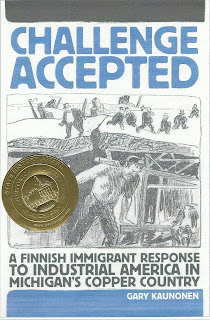 As some of you may have already heard, Challenge Accepted, published by Michigan State University Press, won a Historical Society of Michigan 2010 book award (along with Larry Lankton's book Hollowed Ground.)

To all of you that have advised, edited, translated, helped, employed, funded research, or have shown an interest in the work...I would like to offer a big thank you for your efforts and work.

I don't see the award so much as an individual thing (though I must begrudgingly admit I was pretty excited), rather I see it as recognition of: the great amount of work done by MSU-Press, the important place of Copper Country history in Michigan, Michigan Tech's outstanding record of scholarship, and the Finnish American working class contribution to the building of Michigan.

The award was quite a surprise, a very welcome surprise, which would never have occurred without the help and support from you folks.

For reference, the Historical Society of Michigan announcement of the award listing Larry Lankton's Hollowed Ground and Challenge Accepted is pasted below:

<><><><><><><
Four books were recognized with State History Awards in the Publications: University and Commercial Press category.
The first, Larry Lankton’s “Hollowed Ground” published by Wayne State University Press, chronicles a key part of the Upper Peninsula’s history in recent times—the copper mining industry. The volume concentrates on the beginnings of the three major corporations that came to dominate the industry by 1900, the various mines and the company towns that grew up around them, miner/management relations, and the decline of the major corporations ending with the White Pine mining operation near Ontonagon.
The second book to receive a State History Award in this category was Charles K. Hyde’s “Storied Independent Automakers” published by Wayne State University Press. In this text, Hyde explores the history of the Nash and Hudson car companies which eventually merged in 1954 to form the American Motors Company. More than 90 color photos of restored automobiles as well as brochures, period literature, factory photos, and road test information appear in this volume.
Paul Taylor’s “Orlando Poe: Civil War General and Great Lakes Engineer” published by Kent State University Press was the third recipient in this category. “Orlando Poe” chronicles the life of one of the most influential and yet unrecognized soldiers of the American Civil War. Poe commanded the 2 nd Michigan Infantry during the Peninsular Campaign, and the Civil War era serves as a backdrop for the book. Taylor also documents Poe’s post-war career, in which he supervised the design and construction of numerous lighthouses as well as the largest shipping lock in the world at Sault Ste. Marie.
The fourth book to receive an award in the University and Commercial Press category was Gary Kaunonen’s “Challenge Accepted: A Finnish Immigrant Response to Industrial America in Michigan’s Copper Country” published by Michigan State University Press. As Kaunonen noted in his work, Finns were the largest single ethnic classification in the copper mines and were often treated like the lowest rung of the ethnic ladder. Strong personalities often competed and conflicted in their goals and methods and followings. This volume is a worthy addition to the study of Pre-World War I Copper Country and Michigan history.
The Historical Society of Michigan, which administers the State History Awards, is the state's oldest cultural organization. Founded in 1828 by Lewis Cass and Henry Schoolcraft, it is an independent non-profit dedicated to the preservation and presentation of Michigan's historical
Posted by Gary Kaunonen at 3:50 PM