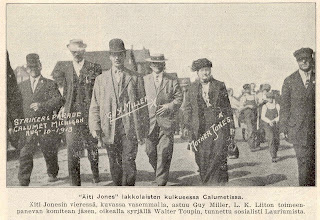 Text from an article by Jane Nordberg that appeared in the Daily Mining Gazette regarding a presentation I gave on the Progressive Era at the Calumet, Michigan, Public Library, Thursday, November 20, 2008:

The [Gilder Lehrman Institute of American History's] exhibit tells the story of the Progressive Era in the United States when a broad-ranging reform movement worked to make government more democratic, to lessen the effects of industrialization and to regulate business.
Kaunonen's talk Thursday is expected to bring those topics into closer focus.
"It was an era of reform driven by the middle class and the educational aspirations of individuals and families that, for the first time in their family's history, had the means to send their children to college," Kaunonen said.
Kaunonen, archivist at the Finnish American Historical Archive and Museum at Finlandia University, will also provide an overview of changes to the national and local labor movement.
"Progressive reformers were not advocates of the groundbreaking change that many working class political and labor organizations advocated," Kaunonen said. "This dichotomy is best seen locally in the 1913-14 strike."
The Western Federation of Miners was an organization bent on the transformation of the economic order, he said, while Michigan's Gov. Woodbridge Ferris was a believer in the power of Progressive Era reforms.
"Ferris looked to implement gradual and metered change," Kaunonen said, while "the WFM and union-minded Copper Country workers looked to radically transform the power structure of the mining companies on the region."
Posted by Gary Kaunonen at 1:15 PM