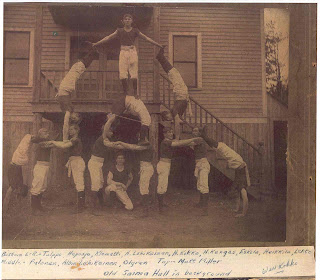 Gymnasts in front of Saima Temperance Hall in South Range, Michigan. The early labor movement grew out of "liberal" factions of the temperance societies. This charge toward labor consciousness was led by thespians and early socialists, known as the "Apostles of Socialism," like Tanner and Hendrickson who traveled across the U.S. "preaching" the socialist message. Soon a splitting occured between the more conservative temperance members and the "free thinkers." The splits of Finnish immigrant groups are covered extensively in Finns in Michigan.
Finns in Michigan is #4 on Amazon's Hot New Releases (in Michigan). Here is a link to that page: http://www.amazon.com/gp/new-releases/books/14279091.
When it became known that I was writing a book titled Finns in Michigan a few folks pointed out, “Holmio already wrote that book.” This is true and not true...let me explain...Holmio’s book, titled Michiganin Suomalaisten Historia, was written in 1967 (in Finnish). The translation, which some erroneously call “The Finns in Michigan,” was translated into English by Ellen Ryynanen in 2001 and titled History of the Finns in Michigan. The current book that I wrote, Finns in Michigan, is part of Michigan State University Press’ “Discovering the Peoples of Michigan” series. This series is a very popular ongoing effort of Michigan State University Press that brings to light Michigan's extensive ethnic diversity and I was more than happy to add the Finnish American experience to this wonderful series.

Physically, the two books differ in one main way, Holmio’s book in original Finnish version is 639 pages long and the English version is 512 pages. Finns in Michigan is 136 pages, including end materials.

Stylistically, Finns in Michigan differs from Holmio’s offering in that this rendition of the Finns’ history in Michigan is a broad survey, rather than Holmio’s comprehensive look at the history of Finnish immigrants and Finnish Americans in Michigan. Holmio’s book also has a number of lists of first settlers and pioneers in various communities, which genealogists might prize, while Finns in Michigan is more of a rolling narrative.

Additionally, Finns in Michigan looks at the Finnish experience in Michigan using a much different “lens” than Holmio’s work. Holmio was a pastor in the Suomi Synod and educator at Suomi College. His book is noticeably written from the viewpoint of a person with this background. I remember a discussion I had with Olaf Rankinen, archivist emeritus, when I first hit the scene researching Michigan Finnish immigrant union groups in 2003. After sitting down with Olaf to discuss Työmies and quite frankly not knowing the full history between Suomi and Työmies, I asked Olaf for sources about Michigan Finns in the labor and working class political movement. He gave me a number of sources and included Holmio’s book stating, “He’s a Synodian, but fair to labor and Työmies.”
As Olaf acknowledged, I recognized a predilection in Holmio’s writing and decided that as a social and labor historian, I wanted to offer a different angle on the history of Michigan’s Finns. I am not claiming that what I wrote is better, truer, or somehow more factual; I am just writing that what you will read in Finns in Michigan comes from a different perspective and thus is not a retelling of Holmio’s Michiganin Suomalaisten Historia.
Hope this might clarify the difference between the two books, but of course don't take my word for it, read them both and come to your own conclusions.
Posted by Gary Kaunonen at 11:00 AM