Italian Hall: The Process of History 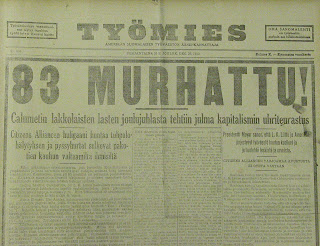 December 26, 1913, edition of Työmies, which detailed events of Italian Hall; the Finnish language sources have for the most part been left out of the writing concerning that tragic event

I am going to wax theoretic here for a bit about the process of doing history using the Italian Hall as an example.


For those of you unfamiliar with Italian Hall, it was a tragic event that took place during the 1913-14 Michigan Copper Strike. No incident during the 9-month strike was more significant than events that occurred on December 24, 1913, at a multi-ethnic Christmas party for strikers and their families at the Italian Hall in Calumet. Sadly, the Christmas Eve party would turn calamitous and tragic. In the waning hours of the afternoon, a stampede of men, women and children went streaming down the stairs of the Italian Hall's second floor where the party was being held. In the stairwell, bodies of fallen people began to pile up on one another, seemingly after a number of people tripped and fell.


The events of that night will likely forever be shrouded in mystery, but some maintain that a cry of fire initiated the fateful rush and some propose that a man wearing a pro-mining company Citizen's Alliance button shouted the false, dubious cry of fire. This assertion has never been verified even after congressional inquires sought to root out fact from fiction. Regretfully, even the gruesome toll of the dead is in question. For many years it was thought that 73 men, woman and children died (children were the majority of those lost in the stampede), but in recent years that number has been placed between 74 and perhaps 80. Shortly after the disaster, the Finnish language, pro-labor newspaper Työmies, published in Hancock, Michigan, placed the number of dead at 83.


Events of that night will seemingly always be surrounded in a cloud of mystery where more questions than answers exist. If anybody today claims to know (or write) exactly what happened that night they are not writing history, rather, they are expressing an opinion. Truth, or the impression of truth, about Italian Hall has all but faded into black because the chaos surrounding the event blurred the historical record and created many myths that today cloud any substantive search for truth in the historical record. The only "truth" that we can state with certitude today is that on that Christmas Eve in 1913 the Italian Hall became the scene of incredible horror, misery and sorrow for many Copper Country families.


A number of articles, books, pamphlets, exhibits, monuments and the like have been written about the singular topic of Italian Hall and provide us a chance to explore a few critical parts in the process of "doing history." One of the great things about the field of history is that anyone can do it. If you had a relative involved in Italian Hall, writing a history about the event or the relative and the event is a great way to expand the knowledge base and historical record. History is not like engineering or chemistry, you do not need heavy equipment to move mountains or a bunch of chemicals to experiment with turning base elements into gold in your basement...history is a peoples' discipline in that almost everyone can do it, but to me there are certain ethics, methodologies and principles that should be adhered to while doing history.


In my opinion, history should be as objective as possible. A historian should not be trying to prove a point or win an argument, leave that to debate teams and trial lawyers. Outwardly trying to prove a point using historical sources is a slippery slope because most often these historical sources are created by or taken from imperfect human beings who have all the pitfalls of human bias and subjectivity. So, no matter how many people swear that something happened how it did in the historical record, there is no way to "prove" that such is the case with documentary evidence. This is not to say that a historian does not have the right to make some conclusions, interpret the historical record in a certain manner, or assert some personal feelings about a topic, but this should always be pointed out clearly in the writing.


To simply write something like, "It must have happened this way because this is the only logical or reasonable thing that could have occurred" is quite simply bad history. It not only leads to people to false conclusions, but that type of writing assumes things that should not be assumed, especially when we remember the old axiom about what it means to assume. Things do not always happen logically, just look at the last 8 years of U.S. history (where's the rim shot on this keyboard) and assuming that things do so, as a person writing about past events, is misleading and is indicative of poor research methodology. History does not have to be "Joe Friday" history (Just the facts please, ma'am), but if a writer or researcher wants to inject personal opinion and interpretation into the historical narrative this should be made absolutely transparent.


The events of Italian Hall are especially susceptible to this because there has been a lot of emotion, mythology and misrepresentation surrounding the event and assumptions could be made on historically subjective things such as testimony, newspaper accounts, and personal memory of events, but this is not the job of the historian. The first job of a historian should be to chronicle various sources through research, writing, and the critique, identification and selection of primary resources.


Now, as a labor historian, I have been accused a couple of times of being too pointed towards a pro-labor view, but this brings up a good point in research and writing...a historian can let bias pick his or her topic, but once that topic is being researched and eventually written about, the bias should end as much as humanly possible.


Challenge Accepted, for instance, may be seen as a pro-labor history, but essentially the book is a labor history about pro-union people...a labor history from the inside out. The book examines an aspect of the Finnish immigrant labor and political movement in the early 20th century on its own terms, using primary sources that were unabashedly pro-labor. If the book is critical of capitalism and large corporations (which it is), it is because the historical actors in this book were critical of those entities.


The evaluation and selection of which primary resources to include in your research and writing is fundamental to doing good history because these are your subjective, first person, time of event sources that capture the feelings, sentiments, or actions of the historical actors or events in question. A number of the works regarding the Italian Hall really drop the ball in this respect because they failed to include or do any personal research of the primary Finnish language sources about Italian Hall. Thus, these works have left out the voice of the largest contingent of ethnic folks whose loved ones died during the tragic events of that Christmas Eve night. Selection of sources is critical to doing good and complete history. Challenge Accepted fills this gap in the primary research of Italian Hall by including quotes from Työmies, which are very powerful...more powerful than anything I could ever write on my own.


Additionally, a word about research, which is the foundation of historical writing. I must admit that I am perhaps a little traditional in this respect, I believe that a historian should do his or her own research...nothing can replace the visceral experience of handling and examining the resource. I will give a good example of this from my own personal experience of working with a tangible item. For Challenge Accepted I looked at the history of the Työmies Publishing Company. In its early history Työmies was a small upstart socialist "rag" with around 1,000 readers, but within the span of a decade it had grown rapidly and achieved a readership of over 12,000. Within this time, the color red had grown to become heavily associated with the paper, its readers and the ideology of the movement it was a mouthpiece for.


So, its 10th anniversary was a pretty big deal. I had read about the 10th anniversary issue of the newspaper, there were greetings from Camille Huysmans, the Belgian socialist and a lot of fanfare. I then had a chance to look at a microfilm copy of the entire run of the 1913 papers and saw the 10th anniversary edition in black and white on a microfilm reader. Later, I decided to look at an actual physical copy of the edition, seeing as Challenge Accepted was to use both historical analysis and material culture analysis. What I found with the physical object was fascinating...the entire 10th Anniversary edition was printed on red paper! Without being in an archive and dealing with the primary resource this unique aspect of Työmies' history would have been lost to me.


To me, historical research should be a first person venture.


Lastly, about the reason for "doing history." I might be a little warped in my perception, but to me the point of the research, writing and work in history, is that someone can come along in 10 or 20 years and totally refute your work. This is how we learn, how the knowledge base is expanded and how the scholarship is increased. It is my sincere hope that in 25 years someone comes along and finds what I did significant enough to tear apart...well, maybe not tear apart, but at least critique. To me history is not about profit or fame, it is about the greater good and understanding those who came before us. This deserves as much scrutiny as possible.
Posted by Gary Kaunonen at 2:03 PM