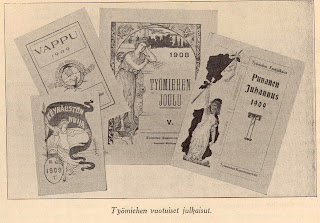 1909 collage of Työmies annual serial publications, which were offered in addition to the newspaper, they are in order from left to right, Köyhälistön Nuija (Proletarian Hammer), Vappu (May Day), Työmiehen Joulu (Workingmen's Christmas), and Punanen Juhannus (Red Midsummer).

It has been a while since the last entry, but I've been busy with a couple of side projects. But first, a status update on Challenge Accepted. I've received an edited manuscript and will work on getting final edits ready for publication, this brings production very close and way ahead of schedule. The folks at Michigan State University Press are moving it along and I think it may be ready by the end of 2009.

The side projects: 1) I've joined a great social networking site by the name of Union Book for union minded, collective action folks. Its an incredible forum for union activity and open to membership to all so join today. A link to the site: http://www.unionbook.org/. One of the best features of Union Book is that it is an international site for union minded folks, I've learned so much about organized labor in its international context, which has been exciting.

Out of my Union Book activities I befriended a Canadian union member with Finnish background. Together we have begun blogging about North American working class issues at: http://canusafinn.blogspot.com/. His name is Ilpo and he belongs to Canada Union of Public Employees Local 1356 (CUPE), which represents full-time and part-time workers of York University in Toronto, Ontario. Ilpo is a very smart fella, check out our blog.
Posted by Gary Kaunonen at 12:49 PM