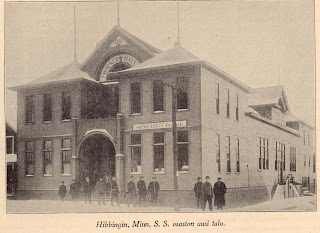 As I am putting the final touches on edits to Challenge Accepted, it occurred to me to answer in print a question a number of people have asked, "Why would anyone write a book like Challenge Accepted? Why are you interested in this topic?"

It is a potentially controversial history about socialist, union minded, and anarchist "Finns," who were a group of people that many may well rather forget...but, and this is a huge but, the contributions and impact of these immigrant socialist-unionist Finns is an important piece in the historical fabric of America.
There have certainly been a number of other books written about the Finnish immigrant socialist-unionist movement and there have been many other books written about labor history, a topic that should be especially dear to Finnish Americans, but Challenge Accepted is a different type of history that analyzes a working class group on its own terms using material culture as a tool of analysis along with the documentary record.

Why material culture? An incredibly influential guru of material culture studies, Thomas Schlereth, writes that material culture creates a, "more democratic, populist, even proletarian history.”
As an extension of social history, which delves into organizations, people, and topics previously disregarded by customary histories, Schlereth writes that, "…both social history and material culture studies challenge the older view of history as past politics, both have sought to demonstrate the great diversity of the American people and their lifestyles, and both have been anxious to expand (some would say explode) the traditional boundaries of American historical scholarship and thereby actually redefine what constitutes American history."

This is my reason for writing a book like Challenge Accepted. It uses the buildings, machines (printing presses, typesetting machines, etc.), and publications of Finnish socialist-unionist immigrants to expand the historical record. I want to bring to light that there are other avenues available when doing the process of history. Authors do not have to be limited by how things have been done in the past, there are alternative methods of research that yield great results for increasing the knowledge base if a person is willing to put in the effort and time to find and work with the not-so-well known resources.
Challenge Accepted is designed to uncover materials, research methodologies, and resources that have up to this point been ignored or scantly accessed in examination of the Finnish immigrants' socialist-unionist movement. It is my hope that the book will stimulate conversation, reveal alternative research methods such as material culture analysis, reserve a place in history for this important immigrant group that challenged the status quo, and hopefully uncover sources that are less traveled or often overlooked.

Is Challenge Accepted the end all authority on Finnish immigrant-socialist-unionists? Of course not, anyone who might claim there work is untouchable or without fault is not grounded in reality or just concerned with making a profit. I think the writing of Challenge Accepted using material culture and ethnic sources is a starting point in opening up non-traditional analysis of history for people or groups like the Finnish immigrant socialist-unionists.
Posted by Gary Kaunonen at 4:09 PM