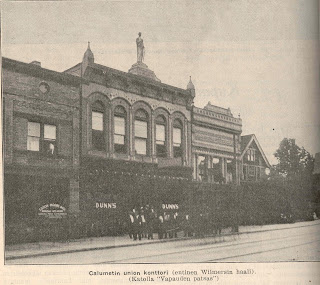 Striker's gathering outside the Western Federation of Miners headquarters in Calumet, 1913

Challenge Accepted is about ready to hit the presses. This week I received the text for the Michigan State University Press catalogue entry...it reads as follows:

Michigan’s Copper Country, once one of the world’s major copper-producing regions, is located on the Upper Peninsula, in the northern reaches of the state. There were active copper mines in the area for 150 years, from 1845 until 1995. Many of the mine workers in this region were immigrants to the United States. Like workers in other low-paying and hazardous occupations in the early twentieth century, mineworkers in Copper Country attempted to unionize, in order to obtain better working conditions, wages, and hours.

The Michigan miners were unsuccessful in their struggles with mine owners, which came to a climax in the 1913–14 Copper Country Strike. This nine-month battle between workers represented by the Western Federation of Miners (WFM) and the three major mining companies in the region took a particularly nasty turn on Christmas Eve, 1913, at a party for strikers and their families organized by the WFM. As many as 500 people were in the Italian Benevolent Society hall in Calumet, Michigan, when someone reportedly shouted “fire.” There was no fire, but 73 to 79 people, over 60 of them children, died in the stampede for the exit.

Against this dramatic backdrop, Gary Kaunonen tells the story of Finnish immigrants to Copper Country, who arrived during the late 19th and early 20th centuries with little understanding of the American copper mining industry. By examining the written record and material culture of Finnish immigrant proletarians—analyzing buildings, cultural institutions, and publications of the socialist-unionist media—Kaunonen adds a new depth to our understanding of the time and place, the events and a people.

/author/Gary Kaunonen earned his Master’s in Industrial History and Archaeology from Michigan Technological University and is currently in MTU’s Ph.D. program in Rhetoric and Technical Communication. Both of his grandfathers worked in the mines of the Mesabi Iron Range in northeastern Minnesota and, before becoming an academic, Kaunonen, himself, charged blast furnaces and operated a bull-ladle in an iron foundry. He is the author of Finns in Michigan (MSU Press).
Posted by Gary Kaunonen at 9:17 PM